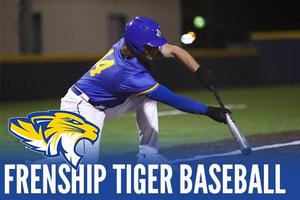 After a shut out win in both Bi-District games against El Paso Montwood, the Tigers are headed to the Class 6A Area playoff series this weekend.
Last Friday evening, the Tigers took on the El Paso Montwood Rams in game one of the Bi-District playoff series.
The Tigers started off with single runs in the first two innings, but hit their stride after Brooks Roberson hit a two-run double in the third inning, setting the stage for back-to-back home runs from Odessa College signee Brock Rogers and Texas State signee Coldon Kiser.
With a 7-0 lead midway through the game, the Tigers didn't let up, scoring five additional runs off Odessa College signee Carter Estill's triple, Amarillo College signee Lawson Peel's two-run explosion, and Nano Mendoza's two-run single.
The Tigers took game one easily, 12-0.
On Saturday, May 7, the Tigers prepared for battle yet again for game two. It was apparent early on that the Tigers had set their sights on sweeping the Rams.
The Tigers brought the fury to unleash a run-rule victory in game two. Hudson Hutcheson's three-run score in the first inning started the game off on a high note, followed by Nano Mendoza's two-and three-run scores to keep the offense on top.
Ryland Morin and Brooks Roberson's performances on the mound stifled the Rams to only two hits. The Tigers finished early with at 10-0 win for game two to take the series.
The win was a little extra sweet for the Tigers as they banked a season best with 10 wins in a row as they head to the Area playoff series.
Frenship Baseball will be back out on the field tonight for game one of the Class 6A Area playoff series, Friday, May 13 at 7:00 p.m. as they face off against Boswell at Hoskin's Field in Wichita Falls.
Game two will take place on Saturday, May 14 at 12:00, with a game three thirty minutes after if necessary.
Published May 13, 2022 Print