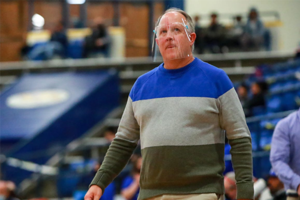 Coach Hilliard began coaching 31 years ago and has spent the past seven years as the Head Girls Basketball coach and Assistant Athletics Director at Frenship High School.

“I am fortunate to get to do what I absolutely love doing,” Hilliard said. “Being around high school kids and coaching basketball is what I was meant to do, so, I guess you could say I am working my dream job.”

Read the Q&A below to learn more about Coach Hilliard and his expectations for his team this season:

Q: Tell us about your 400th win! How was the game? Highlights?

A: Four hundred is just a number and I’m much more of a small picture person. I believe that if you work hard every day and do things right the big picture will take care of itself.  The 400th win was fun but what made it even better was that it was against Monterey. Not only did we beat a local team, but I graduated from Monterey in 1985. We always tell the kids that not all games are the same, and anytime we play a local team it has a little more importance than just the average game because we are also playing for bragging rights.

Q: Tell us about your teams over the years and your 400 wins. Where have your players gone on to play?

Q: How is this season going so far? Where do you think your team is headed?

A: This team has exceeded my expectations so far. I didn’t think we would have the early success that we did because we had seven new to varsity competition this year. This is a fun team to coach.  We had our first game with all 13 players available just last Friday.  It has been a challenge navigating this season, but these kids make it worth it.  They compete hard and try to get better each and every day.  When you have attitudes like that, you are going to have success.

Q: What do you expect for the rest of the season?

A: Our goal is another district championship. We have won four-in-a-row and this year our motto is thrive. We use the Roman numeral V as our “V” for thriVe. We also like the definition during this crazy time, “To progress toward or realize a goal despite or because of circumstances.”  It just seemed very fitting for this year.

Q: What is the best part about being a Frenship Tiger?

A: I love the pride of the community and the diversity of our students. We represent all aspects of our community, city, state, and country, yet we are able to take all our differences and unite as a school district.  A lot of people could learn how to behave if they spent some time watching how the Frenship Tigers do it.