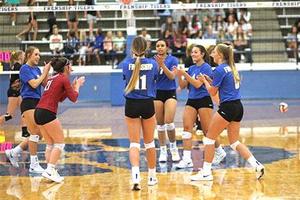 The Tiger Volleyball team has more than proven themselves to the statewide prognosticators as they enjoy their 6th week in the TGCA Top 25 in 6-A, this week at #21.

The Tiger Volleyball team has more than proven themselves to the statewide prognosticators as they enjoy their 6th week in the TGCA Top 25 in 6-A, this week at #21. The Tigers are 27-7 on the season and sit in the catbird seat in District 2-6A at 4-0. Last week the Tigers dominated their competition posting two sweeps in four days in gyms separated by 121 miles.

On Tuesday, October 1, the Tigers went to Midland High to face the Bulldogs on their home turf. They dispatched them 25-19, 26-24, and 25-23 in a hard-fought contest. The Tigers combined on the night for 8 aces and were led by Emma Davila who posted 3. Otherwise, offensively it was Gracie Harrison with 12 kills and Aali Mayfield with 9 kills and 1 ace who led the Tigers on the night. Defensively Jentre Kennedy led the way with 1.5 blocks and Hanna Page with 21 digs, she was followed closely by Kendall Mahaney with 17 digs of her own. Kayton Genenbacher was also impressive on the evening with 30 assists to her credit.

On Friday, the Tigers swept the Permian Panthers 25-14, 25-14, 25-18. Defensively there were five Tigers with double-digit digs, led by Gracie Harrison with 18, Hanna Page posted 16, Emma Davila and Kendall Mahaney posted 12 each, and Kayton Genenbacher chipped in 11 of her own. Genenbacher once again set her team up for success with 42 assists to her credit on the evening. Offensively it was Devyn Nairn bringing the thunder with 12 kills, but multiple Tigers got in on the scoring fun with 47 combined kills on the night spread among eight players. Kendall Mahaney led the way from the service line with 4 aces and Genenbacher chipped in another 2 as well.

As the Tigers prepared to take on the Permian Panthers in the Tiger Pit last week, word came through that Gracie Harrison was named the Lone Star Varsity Female Athlete of the Week. Harrison an outside hitter for the Tigers, combined on the previous week’s wins over Tascosa and Midland Lee with 53 digs, 22 kills, and 2 blocks. Harrison became the third Tiger in as many weeks to take home Athlete of the Week Honors from Lone Star Varsity. Quarterback Donovan Smith received the honor after Tiger Football’s win over Lubbock-Cooper and WR Drew Hocutt took it the following week for his 200+ yard performance over El Paso Andress in Roswell, NM.

Now this week, Tiger Volleyball’s Kayton Genenbacher is up for the weekly honor. She posted an incredible 72 assists, 15 digs, 8 kills, 3 aces, and 1 block in last week’s two sweeps of district opponents. You can vote for Genenbacher here: https://lubbockonline.gatehousecontests.com/Athlete-of-the-Week-2019---2020/

The Tigers will face the Odessa High Bronchos in the Tiger Pit at 6:00 pm on Tuesday, October 8. Fans are encouraged to wear pink for the PINK OUT VSCO GIRL theme night. Frenship will have an open date Friday and will then travel to Midland Lee the following Tuesday and host Midland High at the Tiger Pit for a Friday Homecoming matchup. Video of Frenship Volleyball home games can be found the following day at www.frenship.tv.